Wilhelm Reich was one of Freud’s star pupils – and an outspoken anti-Nazi. A victim of a persistent campaign of lies & distortions, he pursued his work in 6 countries over several decades, ultimately landing in the U.S. – where he was prosecuted & imprisoned. “Love, Work and Knowledge” examines his life & scientific achievements, including his cancer studies & experimental medical treatment, his weather research, & his discovery of a previously unknown form of biological & atmospheric energy that he called orgone.

The true story of Wilhelm Reich – a pioneer persecuted and imprisoned. His books and publications were banned and burned in America, where he died in a federal penitentiary. With the help of never-before-seen documents, recordings, photos, and interviews with those who knew him, “Love, Work and Knowledge” presents the facts about Wilhelm Reich’s life and work. 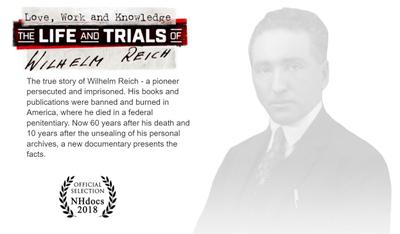