The Sandy River Ramblers is a Maine bluegrass band with a heavy emphasis on original songs about Maine. The band was organized in 1982, and has been continually active from that time.

Guitarist Stan Keach, who does most of the writing for the group, is a nationally-known bluegrass songwriter whose songs have been recorded by world-famous bands. Keach’s co-written song, On Boot Hill, which has been recorded by Ralph Stanley II, won the 2017 Maine Songwriters Association Song of the Year award.

Banjoist Bud Godsoe, a Rambler since the band’s inception, learned to play banjo while working on the Alaska Pipeline. A retired building contractor and shingle mill operator, Bud lives in Madrid, in the foothills of the western mountains. A top-flight banjoist, Bud has, in recent years, become an outstanding resophonic guitar (dobro) player as well.

Upright Bassist Julie Davenport started playing bluegrass in the Maranacook String Band, a youth band Keach (then a teacher) started at Maranacook High School. She became the Rambler’s full-time bassist in 2014, and is well-known for her stunning vocal skills, but is also invaluable to the band for her strong bass playing. Julie is a professional forester and she and her husband run a small farm in Leeds.

Mandolinist Dan Simons started playing guitar in high school, and has been playing in a duo act with Stan since shortly after he graduated from Maranacook. A diligent student of the ultra-traditional Bill Monroe mandolin style, Dan incorporates a wide variety of techniques in his virtuoso playing.

Dana Reynolds, a 16-year-old Maranacook High School student, plays hand percussion and sings with the band. A great lead and harmony singer, with skills remarkable for someone so young, Dana is also a standout athlete (cross-country, skiing, softball), and is active in high school theatrical productions. She plans for a career in music education.

Finn Woodruff, the Ramblers’ first string fiddler, is a 20-year-old Bowdoin College student. Finn, an avid outdoorsman, lives in Brunswick, and, despite his young age, has been fiddling professionally for over 8 years.

The Ramblers’ 2012 CD, Cry of the Loon and other original songs about Maine, has sold briskly and has gained stellar reviews from bluegrass publications. With a variety of comedy and serious songs like Slow Down (You’ll Hit a Moose), Donn Fendler, Boots From L. L. Bean, the album is very popular among Ramblers fans.

The Ramblers new CD, Home in the Heart of Maine, is due to be released in early May. Like Cry of the Loon, it will consist entirely of original songs about Maine 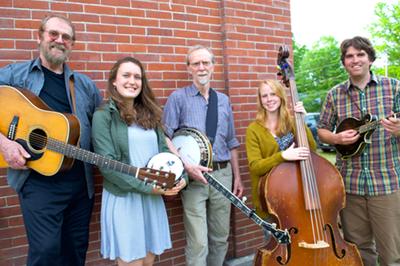