In German with English Subtitles.

A spellbinding mystery of identity, illusion, and deception unfolds against the turmoil of post-World War II Germany in the stunning new film from acclaimed director Christian Petzold (Barbara, Jerichow). Nelly (Nina Hoss), a German-Jewish nightclub singer, has survived a concentration camp, but with her face disfigured by a bullet wound. After undergoing reconstructive surgery, Nelly emerges with a new face, one similar but different enough that her former husband, Johnny (Ronald Zehrfeld), doesn’t recognize her. Rather than reveal herself, Nelly walks into a dangerous game of duplicity and disguise as she tries to figure out if the man she loves may have been the one who betrayed her to the Nazis. Evoking the shadows and haunted mood of post-war Berlin, Phoenix weaves a complex tale of a nation’s tragedy and a woman’s search for answers as it builds towards an unforgettable, heart-stopping climax.  Rated PG-13, 1h 39min. In German with English Subtitles.

All shows $5 and we'll be poppin' the popcorn. 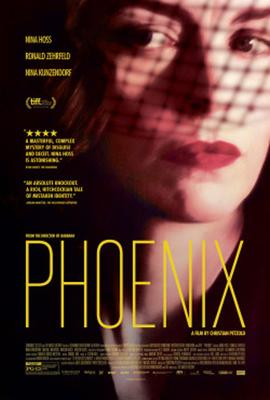