CANCELLED DUE TO COVID-19

The Sandy River Ramblers have been playing Bluegrass-flavored acoustic music in Maine since 1983. Their special niche is playing original songs about Maine, mostly written by bandleader and Guitarist Stan Keach, a nationally-known Bluegrass songwriter whose songs (not the ones about Maine) have been recorded by some of the biggest bands in Bluegrass. Keach won the prestigious Maine Songwriters Association Song of the Year award in 2017.

Banjo player Bud Godsoe is, along with Keach, a founding member of the Ramblers. After learning to play the Banjo while working on the Alaska Pipeline, Godsoe has gone on to become one of Maine’s top Banjoists. Mandolinist Dan Simons is also a top-flight instrumentalist. Dan, the younger brother of TV and film star Tim Simons, is a woodsman, outdoorsman and homesteader, living in Vienna. Besides Keach, Godsoe, and Simons, all of whom are more than competent harmony and lead singers, the Ramblers are blessed with two extraordinary female vocalists — Upright Bassist Julie Davenport (a forester and small farmer by trade), and 18-year-old vocal prodigy Dana Reynolds. The Ramblers are joined in their biggest shows by fiddler Finn Woodruff, whose impressive skills belie his young age (21).

Besides their numerous songs about Maine topics, the Ramblers are a versatile band who play songs from many genres including Country, Bluegrass, Rock, Folk; and Gospel. Their act always includes quite a few comedy songs, including “Boots From L. L. Bean”; and “Slow Down (You’ll Hit a Moose)”. Their 3-and-4-part vocal harmonies are among the best you’ll hear. The Ramblers 2012 CD, “Cry of the Loon and other original songs about Maine,” has been called “a gift to Mainers” by Bangor Daily News writer George Smith.

Tickets are $20 for Adults and $10 for Youth (18 and under). Tickets are available in advance at this link:

Tickets will also be available at the door. 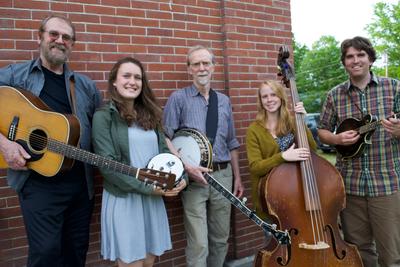