Antarctica is the End of the World, the most remote place on Earth, possessing the planet’s coldest, windiest, and most savage weather. The size of the United States and France combined, a full 98% of the Seventh Continent is covered by the Antarctic Ice Sheet — the largest known single mass of ice — which averages 7,000 feet in thickness. Yet Antarctica’s isolated position on the globe, encircled by the tempestuous Southern Ocean and protected by millions of icebergs, kept its existence from being authoritatively confirmed by explorers until the 1820s. To this day, Antarctica challenges humankind with the most supremely difficult conditions on Earth — that include the coldest recorded temperature of minus 128.56 degrees Fahrenheit (minus 89.2 degrees Celsius), measured July 21, 1983 at Russia’s Vostok Station.

Local Mt. Everest climber and author/photographer Ed Webster visited Antarctica, “the Great Frozen South,” twice in 2018 as a Polar History lecturer on adventure cruise ships for Quark Expeditions. And he is returning again in November 2019. Ed’s journeys took him by ship from the world’s southernmost city of Ushuaia, Argentina over a dozen times across the notoriously stormy seas of the Drake Passage to the Antarctic Peninsula. The scenic and animal photographs captured by Ed and his fellow passengers aboard Quark Expedition vessels and during multiple landings on assorted islands along the peninsula and on the Antarctic mainland, are stunningly beautiful. Antarctica is the last pristine environment on Earth: home to immense glaciers, snow-blanketed mountains, countless icebergs, over 20 million Penguins, humpback whales, orca whales, seals, and seabirds.

The Antarctic Treaty was signed on Dec. 1, 1959 by 12 countries. Antarctica is dedicated, by International law, to peaceful scientific research activities. Forty-eight nations have now signed the treaty and of those, 30 countries fund and operate 80 research stations situated mostly around the continent’s perimeter, but with several on the Icecap itself, including America’s Amundsen-Scott Station at the South Pole. Antarctica’s summer population numbers around 4,000 — while just a thousand scientists endure the long, perpetually dark, below-zero winter months. In recent decades, researchers have documented climate change threats such as the Ozone Hole, the breaking up of the continent’s Ice Shelves, and increasingly fast-melting glaciers and icecaps.

In this new presentation, Webster recounts the historic voyages and eventual discovery of Antarctica by 18th and 19th-Century explorers as a prelude to the dramatic and ultimately deadly Race to the South Pole during the first decade of the 20th Century by Capt. Robert Scott, Sir Ernest Shackleton, and Roald Amundsen. Combining original archival photographs taken by these world-famous adventurers, pictures by scientific researchers, his own modern images, plus superb wildlife videos, Ed Webster really and truly does make Antarctica Come Alive !! 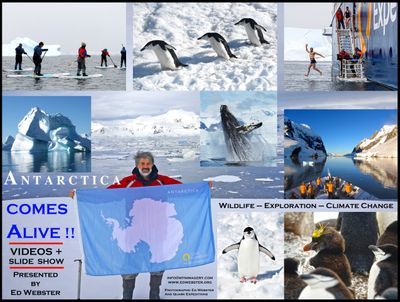