Hymn for Her have been busy touring across the country and abroad over the past few years, injecting juiced-up backwoods country blues with a dose of desert rock psychedelia that has been described in such ways as, “Hell’s Angels meets the Amish.”, "Opening up Pandoras box and out jumps two hillbillies with electronics that blow your mind."

Impressively, the two create their “ripsaw sounds” (Los Angeles Times’ Randy Lewis) with only a few instruments. Wayne (with the devilish voice), mainly playing the kick-drum, high-hat, acoustic guitar and harp, serves as the group’s rhythmic driving force. Lucy (of the fallen-angel voice) delivers a gritty squall on her “Lowebow” — a custom-made cigar-box guitar: “The Riff Monster.”

Hymn For Her smash through the highway guardrails and land in a carnival on a hot air balloon. Float away with them on their new release, ‘Pop-N-Downers. Release Date: Oct 5, 2018 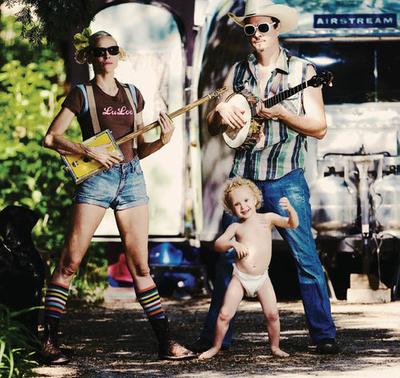