Sami’s latest project is The Man I Love, formed in the summer of 2015. Incorporating elements of classic RnB, jazz, and singer-songwriter lyricism, Sami Stevens and The Man I Love plays music written by Stevens, arranged in collaboration with the band.  The band released their first album And I’m Right (Leesta Vall Records) in Autumn of 2017 on vinyl.

“And I’m Right has the mark of maturity and that’s a rare thing to find these days…the lyrics often impress as well with She Is God and Child They Said Was Mine mixing together Phoebe Snow style lyrical intelligence with a concise emotional impact.” -Bluesbunny

Sami has studied privately with Dominique Eade, Kate McGarry, John McNeil, and Jeanie Lovetri. She graduated from the New England Conservatory of music with a BM in Vocal Jazz Performance and from Tufts University with a BA in Psychology in the fall of 2014. Sami grew up in East Winthrop, Maine, and is currently living in Brooklyn, NY. 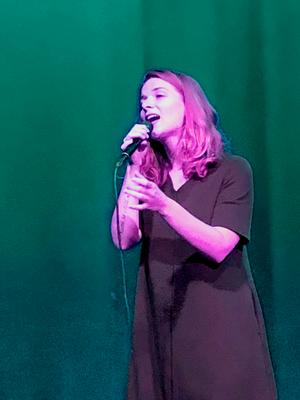