The Most Famous Survival Story of All Time !! An Educational & Historical Lecture by Ed Webster

Sir Ernest Shackleton’s infamous Endurance Expedition to Antarctica is one of history’s most astounding survival stories, a tale overflowing with almost unbelievable privation and pluck. Departing England in 1914, the renowned British explorer and his team aimed to become the first to fully traverse the Antarctic Continent. Then came the unexpected: their ship, the Endurance, became frozen into the pack ice. Eventually it was crushed by surging ice floes—and sank.

Shackleton and his twenty-seven men lived for months on the floating ice floes. When the ice melted, the men took to their three wooden lifeboats and set sail toward the nearest land: Elephant Island. As events continued to go wrong, the frostbite, starvation, and sufferings of the men only increased. Yet Shackleton, now acclaimed as one of the greatest of leaders, somehow held his team together.

Finally, with five men, Shackleton sailed their largest, 22-foot wooden lifeboat across the worst ocean in the world—braving the Southern Ocean’s 50-foot waves—toward yet another island, South Georgia, 870 miles away. That Shackleton succeeded in reaching South Georgia, that he crossed it’s never-before-traversed uncharted glaciers to reach a Norwegian whaling station on the opposite shore, AND successfully rescued his marooned team-mates on Elephant Island, are facts quite seemingly beyond possibility—yet they are the true facts. Not a man was lost.

To honor Shackleton’s Endurance Expedition, Antarctic guide and Mt. Everest climber Ed Webster presents an educational, historical lecture documenting Shackleton’s life and times, plus his singular leadership of the Imperial Trans-Antarctic Expedition, to use its proper name. Ed’s personally-narrated lecture chronicles Shackleton’s 1914 to 1917 ordeal with the ORIGINAL PHOTOGRAPHS taken by the team’s cameraman, famed Australian photographer Frank Hurley. A bonus are several magnificent pictures of the Crossing of South Georgia by Ed’s Mt. Everest partner Stephen Venables, one of just a few explorers to duplicate the climactic end to Ernest Shackleton’s Incredible Journey.

Wrote one of Shackleton’s men:
“For scientific leadership, give me Scott;
For swift and efficient travel, give me Amundsen;
But when you are in a hopeless situation,
When there seems to be no way out,
Get down on your knees and pray for Shackleton.” 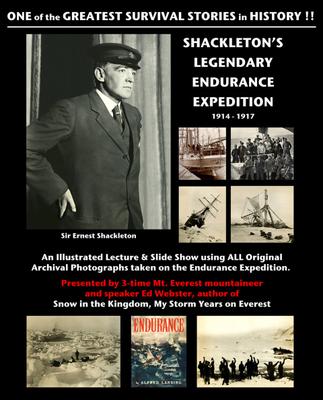 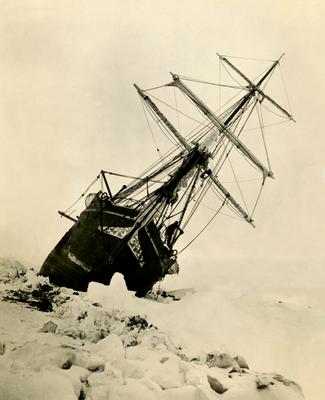